It’s safe to say that Urban Dirt Co. is Durable Green Bed’s No. 1 fan. And we certainly are fans of Urban Dirt Co., because she puts edible chef’s garden beds filled with delicious food in many places where they should belong.  but often aren’t: public spaces, corporate campuses, schools, hotels, restaurant culinary gardens, and other similar places. And it’s the fact that Durable GreenBeds last for 25+ years that has helped make her business successful—she doesn’t  have to replace the beds anytime soon (25 yrs!) and maintenance consists of re-staining the top trim every 2 years or so.

Piper Klee-Waddle (Owner of Urban Dirt Co.)  designs, builds, installs, and maintains edible gardens. Her “stomping grounds” are in North Texas, an environment where she said building raised beds with wood just did not make sense.

Piper found out about Durable GreenBeds a few years ago when a fellow landscaper in a different state told her about them. Her friend was using cedar for garden beds, but had discovered an alternative garden bed made of the wood chip concrete composite. “I researched it, I emailed Durable GreenBeds for a sample,” Piper says. “I loved it.”

Piper says her clients for commercial chefs gardens had been asking her about commercial raised beds made of something other than cedar, something that looked more commercial and substantial, so she was already looking for an alternative, and Durable GreenBeds fit the bill.

“Most of my commercial accounts were looking for something other than cedar because they didn’t want what they were referring to as ‘the homeowner version’ of a garden box,” Piper says. “My clients like the industrial look of the Durable GreenBeds and they like the fact that it’s never going to fall apart. They don’t care about the price because they know they don’t ever have to replace it.”

Because her clients didn’t want wood, Piper had been planning to shape forms and pour concrete for garden beds. But once she received her sample in the mail and showed it to everyone who had asked for a wood alternative, they were sold.

“Once they could feel it and see it, they liked it,” she says. “It’s interesting and different. Corporations don’t want cedar because the perception is it’s for decks, not for garden boxes.”

Piper is in her fifth year managing edible chefs gardens for her corporate customers. After a couple of years in business, she knew she had to retool her focus so she was spending her labor time managing the plants, and not managing the installation and maintenance of garden beds.

“I want to install the beds, put the plants in, and take care of the plants,” Piper says. “I can’t spend the time on installation or maintenance; there’s just not enough margin for the amount of time it takes.”   The Durable Green Bed kits, easy to assemble with all the pieces, and using standard tools, make installation easy, and save on labor, as well as maintenance.

The success of Piper’s landscaping and gardening business depends on getting the “bang for her buck” that a one-time installation of a durable garden bed delivers. In North Texas, as in many parts of the country where high humidity and rainfall take a toll on anything wood outdoors, Piper says cedar raised garden beds only last two or three seasons. Even if the wood doesn’t actually rot and fall apart, it looks terrible—weathered, gray, and worn out looking, pulling apart at the corners. That’s a look her high-end clients don’t want.

“I can’t spend that kind of time on maintenance, I have to focus on the plants,” Piper says. “When you add in the cost of replacing the cedar boards every two or three years to keep them looking nice versus the cost of buying this one time thing, it just doesn’t make sense to do it any other way.”

Plus, as a result of lumber shortages and increased demand due to the pandemic, cedar is not cheap right now. In fact, the National Association of Home Builders reports that lumber prices soared 50% between April 17 and July.

Durable GreenBeds don’t just look like a concrete planter box. They have a unique texture, and they can be painted or sealed to customize their appearance. Piper stained one set of raised garden beds a branded lime green. “You can see them from the highway!” she says. “I haven’t had to repaint those and that was also an installation from two summers ago.”

The tops of the concrete boxes are wood, and that does need to be resealed occasionally, but that’s just a small strip of wood. The corners are joined with an attractive gray metal bracket, which Piper says “are pretty fancy themselves.”

“The corners don’t bend, they don’t rust, they’re painted with a high grade baked on paint, so, you know, nothing ever happens to them,” she says. “I had a landscaper with a lawnmower run into it and it dented the bracket, but it would have crushed a cedar bed.”

When Piper is introducing this material to a potential client, she sells them on three things: “The longevity, so I don’t have to replace them. I tell a developer or a project manager it’s a 25-year product. All you’re going to be paying me for is plants. I can customize the colors, I can paint it. That’s that gives me a lot.”

Because her beds are placed in high-traffic public areas, she had some concern that people would be able to damage the boxes somehow, but that has not proven to be the case. “Someone could pull out the plants, but they can’t do anything to these boxes, they can’t mess them up, they’re literally that durable,” she says.

One other thing that sold Piper on the products is the customer service. She says she does a lot of research to find vendors for her products, and she depends on people who promptly respond with important information like price lists. Piper says Tom Van Denend, the owner and manufacturer of Durable GreenBeds, is generous with his information.

“He’s never told me that anything I’ve asked is proprietary or that I can’t share anything,” remarks Piper. “He’s always been super encouraging and helpful and in fact he gives me ideas for people to call who might want more boxes! So even if there was something else out there that was comparable or interesting, which I don’t know of, it’s going to be my first presentation to use Durable GreenBeds as a premium commercial garden box.” 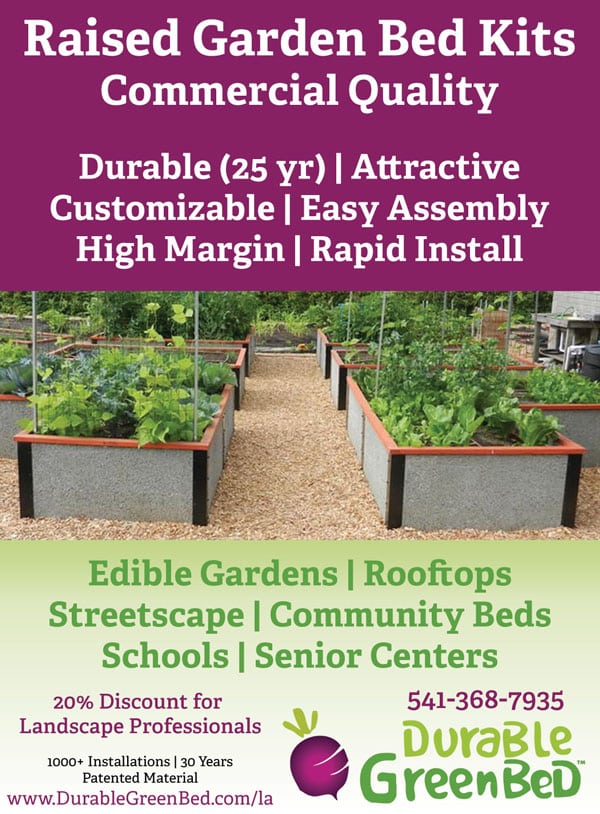 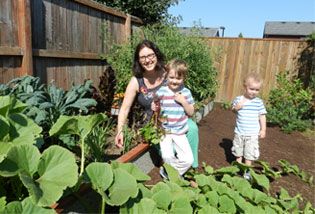